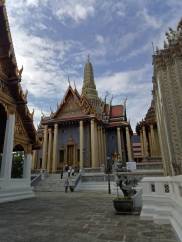 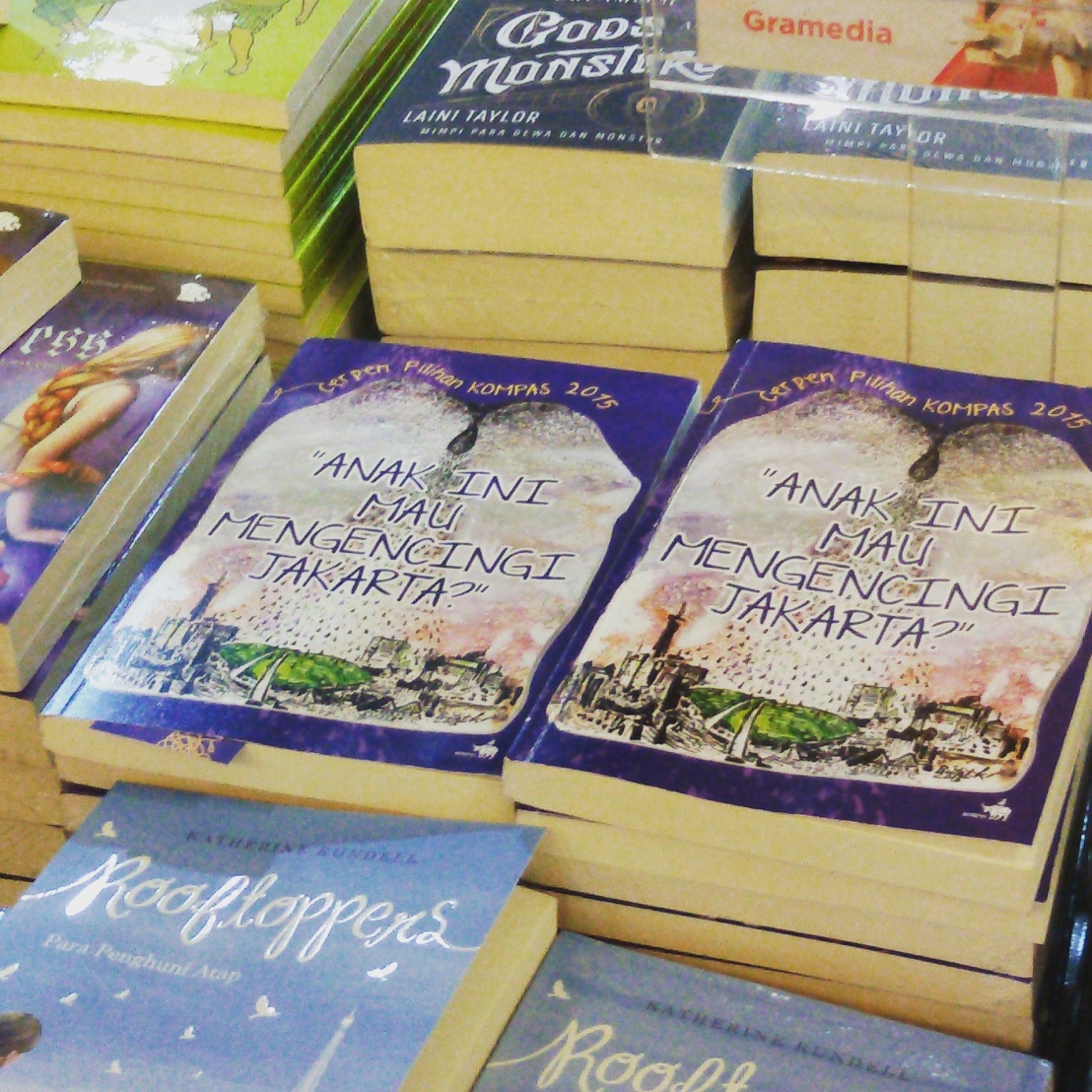 As part of its annual literary fiction program, Indonesia’s leading daily newspaper Kompas has launched its annual best short story anthology, consisting of work printed by the paper throughout 2015. The event was held in conjunction with an awards ceremony for its best fiction writers.

Many writers flocked to Bentara Budaya Jakarta on May 31. As well as those whose works were selected for the anthology, Education and Culture Minister Anies Baswedan, pianist and composer Ananda Sukarlan, painter and scholar Mudji Sutrisno, Nano and Ratna Riantiarno of Teater Koma were also seen among the crowd.

Kompas has a short story page that runs every Sunday that publishes the works of numerous literary writers across the nation. The tradition started in 1972 to give space for writing outside the journalistic discipline, according to Kompas chief editor Budiman Tanuredjo.

In his opening speech, minister Anies Baswedan said that it was the duty of literary writers to spur the growth and development of the Indonesian language by exploring and opening themselves up to the possibilities of its usage.

According to Anies, the Indonesian language had around 23,000 dictionary entries in 1943, a number that has expanded to 94,000 in 2015. The expansion is relatively small when compared to the English language, which has around a million dictionary entries and expands at a rate of 8,500 entries per year.

“This is because English writers open themselves up to new words. Indonesia has [more than] 700 local languages, which should serve as a good reserve to enrich our language,” he said.

He added that the ministry was considering the idea of collaborating with short story writers to support its policy of a mandatory 15-minute reading period of non-school textbook materials by students, in order to promote reading habits among Indonesians.

(Read also: 12 Indonesian books you should add to your reading list)

This policy was one of several implemented in response to a recent study conducted by John Miller, president of Central Connecticut State University in New Britain, which put Indonesia in the second-lowest position of 61 measurable countries for its “literate behavior characteristics”. The study observes various factors, from numbers of libraries and newspapers to years of schooling and availability of computers.

The human face of Indonesia

This year’s best short story anthology was given the title “Anak Ini Mau Mengencingi Jakarta?” (“This Kid Wants to Urinate all over Jakarta?”).

The anthology is named after the year’s best short story, written by veteran literary writer Ahmad Tohari, famous for his Ronggeng Dukuh Paruk trilogy (translated by the Lontar foundation with the title of The Dancer). Anak Ini Mau Mengencingi Jakarta? depicts the life of a poor family living beside the train tracks in the Senen area of Central Jakarta in meticulous detail, which can be seen in the writer’s description of them as a raw instant noodle-eating family of three.

The story is centered on the behavior of the young boy in the family, who constantly urinates in random places with his father who always reminds him to be careful so as not to let the urine splash onto his sleeping mother’s body or a pile of clothes.

“I was a bit surprised when my story was chosen as the best one, because the story is a bit vulgar. The father tells the boy that he can urinate anywhere in Jakarta, but not near his mother. This story reflects the anger that I and other artists have when we see what happens in Jakarta, especially along its rivers,” Ahmad said upon receiving the award.

Effix Mulyadi, a member of judges who curated the anthology says in his preface that the story describes how the poor are greatly marginalized in the city.

Born in Bali, he has written numerous journalistic pieces, non-fiction as well as fiction books in the last thirty years. His works are rich with references to the Balinese culture and way of life. His anthology Mandi Api (Immersing Oneself in Fire) won the Khatulistiwa Literary Award in 2006.

“Literary writers are people who sacrifice themselves in order to walk a difficult path, which has become even more difficult these days thanks to so many digital distractions. They, however, persist in enlightening society,” Kompas deputy chief editor Rikard Bangun said.

This year’s anthology contains a number of new topics rarely seen in previous Kompas best-of collections. Among the most prominent themes are those relating to the lives of lesbian, gay, bisexual and transgender (LGBT) people and the persecution of religious minorities in Indonesia.

Guntur Alam, a writer from Palembang, South Sumatra, for example, contributes the story Upacara Hoe (The Hoe Ceremony), about gay and lesbian siblings who find a new life after their father passes away.

“I want to write about this because the topic is quite popular. Meanwhile, in the Palembang area there are lots of Indonesian-Chinese communities and they have a unique style of funeral procession. So I wanted to incorporate that element,” said Guntur, who has written short stories for various Indonesian media outlets since 2010 and published an anthology last year.

Meanwhile, a newcomer to Indonesia’s literary scene, 19-year-old Miranda Seftiana also writes about various aspects of the lives of LGBT people in her short story.

“I am a psychology student and homosexuality has already been dropped from the classification of mental illness in our diagnostic book (the Diagnostic and Statistical Manual of Mental Disorders). It was also inspired by a number of salons in my hometown of South Kalimantan,” Miranda, who started writing short stories at the age of 13, said.

Meanwhile, Faisal Oddang’s story tells of how followers of the Tolotang local religion in South Sulawesi are forced to convert to one of the religions recognized by the nation, and are witch-hunted and killed by the military along the way.

At the end of the ceremony, writers were challenged to spontaneously compose a short story. A laptop was set down on the stage, and a number of writers like Agus Noor, Dewi Ria Utari and Jujur Prananto were invited to write opening and closing sentences. The ‘frame’ of the story will be distributed via email to all 23 writers to complete and the collaborative effort will be published in conjunction with the paper’s anniversary on June 28.

The audience’s spirits were still high at around 10:30 p.m. and they broke into laughter at one of the spontaneously written fragments about an old writer who received a letter from the “Culture Minister” telling him that he has won a Rp 100 million prize, only to be told later by the same minister that it was probably ‘just the writer’s dream’.

Anies was challenged to give a title to the story. Initially, he titled it Lagi, Surat Menteri Beri Harapan Palsu (Again, the Minister’s Letter Gives False Hope), drawing laughter from the audience, but then changed it to Sang Menteri dan Mimpi Penulis Tua (The Minister and The Old Writer’s Dream). (asw) 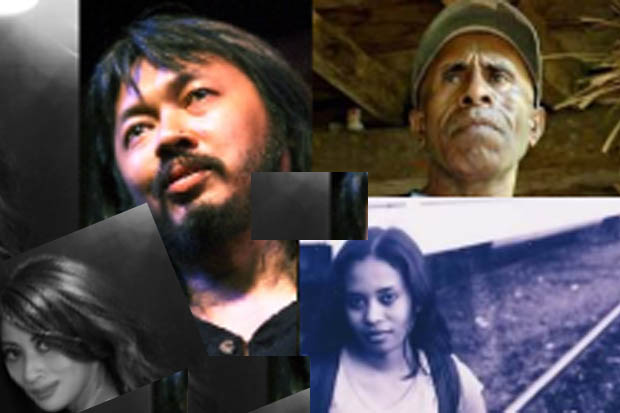 Read My World invited two South East Asian guest curators to select the writers and poets from their region that tell stories beyond the issues of the day. Authors that, right now in the Caribbean, matter, in line with the curators’ vision of literature and the festival’s penchant for fresh and engaged voices. Columnist translator Kadek Krishna Adidharma Indonesia ) selected nine authors from Indonesia, of whom the first four will join us at the festival in October: END_OF_DOCUMENT_TOKEN_TO_BE_REPLACED